Over 1036222 have signed the Pledge for Nonviolence. Take the Pledge →

On March 2, the Boston SGI-USA Buddhist community joined together and installed the Victory Over Violence (VOV) exhibition in a bright, modern solarium overlooking the campus plaza of Cape Cod Community College in W. Barnstable, Massachusetts as part of the 13th annual Multicultural Festival of Cape Cod. Many people of varying ages and walks of life attended the festival and learned about VOV's powerful message of nonviolence. Many of the more than 350 people attending the VOV exhibition expressed their appreciation for VOV's focus on addressing the root cause of violence in our society.

Some guests provided written comments. One woman expressed that she "learned about many differences in the types of violence that thirteen years of therapy didn’t teach" her. She continued, "...you were able to teach me and I can empower my daughter. Continue to educate people. The world still needs your support.”

The VOV exhibition poses the question – what can each of us do to end the violence in our homes, communities, country and the world?  Bringing the exhibition into a community like W. Barnstable helped to stimulate dialogue, heighten awareness, and inspire creative thinking about the root causes of violence and solutions that could be put into practice.

On March 4, the VOV exhition travelled to Sturgis East Charter School in Hyannis, MA where it was viewed by over 300 students and faculty. Many staff integrated the messages from the panels into classroom discussions and the Multicultural Club created probing questions to inspire dialogue among students. The school also decided to post a link to the online pdf file of the VOV exhibition on its website for the entire community to study.

Comments from students included the following: 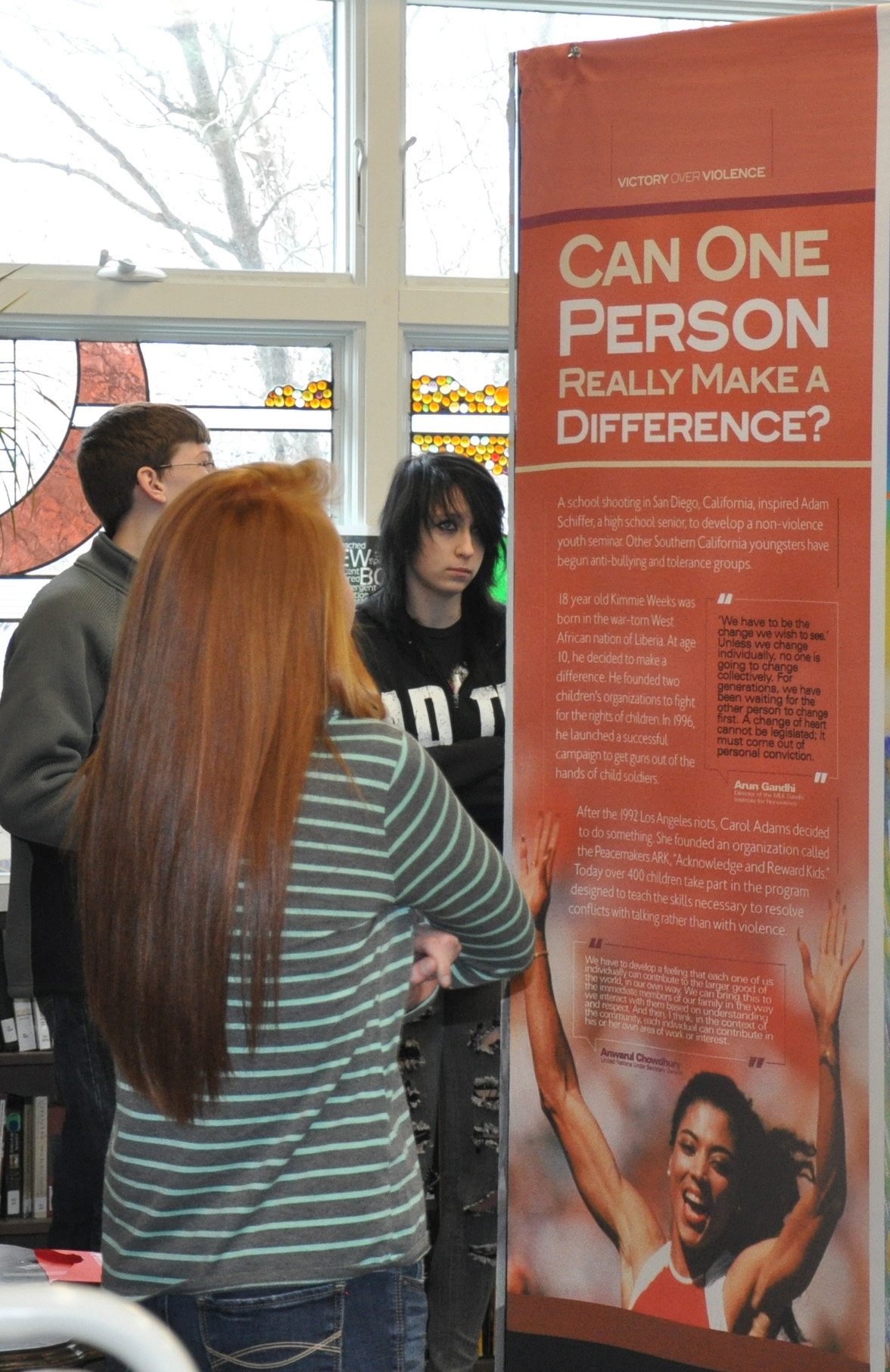 The exhibit made me much more aware of the different types of violence found in society.  It also had examples of certain outbursts of violence that were quite shocking, but informative.

I think that this exhibit was a really good insight as to the many different kinds of violence and even how violence can start.  I feel like it taught people a much wider range of what is considered violence, such as that violence is not only physical harm, but many other things as well.

I thought that the exhibit was a great idea.  It made me sad but at the end, it made me hopeful.  The parts about Hitler and Columbine made me especially said.  It made me think of the Sandy Hook shooting, how the world lost 20 beautiful little smiles that day and 6 adults who deserved to live as well.  It made me think about why there is so much gun violence, especially in schools.  I want to visit the VOV website.

I was very moved by the Jewish-Palestinian part of the exhibit because it pertains to my life.  It’s cool to see people care about this issue!

I think that the part about violence and anti-violence that most effects me is about being passive and apathetic.  There are only a very few people who commit acts of violence compared to the many that stand by and watch.  I’ve started to realize just how many acts of violence I see everyday, that don’t directly affect me so I don’t take note of them.  What if I tried to do something every time I saw violence?  I don’t actually think I would do that, but it’s something to think about.  Even if everyone only reacted to one thing, it could make a difference.

Victory over Violence!  Violence…it comes in many shapes and forms.  You can’t always see it with the naked eye or physically feel its pain but it is everywhere.  It’s in the homes of our loved ones, it is in our schools.  IT IS ALL OVER THE WORLD. There are wars in every country.  Violence needs to be stopped and we can do it.  Start your victory over violence.  Be successful and Good Luck!

I thought that the presentation was inspirational and it was quite reassuring to know that it is not just happening in one place.  When I read that someone was trying to get guns out of the hands of children I was shocked because I never thought it was that bad.  Now that new generations know about what happened in the past, they are more aware of it now.  So that is quite helpful.

The Victory Over Violence campaign was launched in 1999 by the youth of the Soka Gakkai International-USA Buddhist Association (SGI-USA) in response to growing concerns over youth-related violence such as the Columbine High School shootings in Littleton, Colorado.

Leyla Nickerson and Deanna Bairos contributed to this article.