Over 1036220 have signed the Pledge for Nonviolence. Take the Pledge →

What role can the media play in helping women to empower themselves? Where can you find the strength to continue advocating for the rights of women in the face of overwhelming opposition? As part of our ongoing exploration of the virtue of courage, we would like to look at these questions through the following interview with Chouchou Namegabe Dubuisson. Chouchou is a fearless pioneer for justice and accountability in the Democratic Republic of the Congo (DRC) who has connected to the masses through radio— the only medium of communication accessible to nearly everyone, everywhere. In the late 1990's, she began to use radio broadcasting as a powerful weapon against the women's human rights violations being perpetrated in her community. The interview was originally printed in the July 2012 issue of SGI Quarterly.

"An Undaunted Voice"
An interview with Chouchou Namegabe Dubuisson

Chouchou Namegabe Dubuisson is a radio journalist from the city of Bukavu in Kivu, the eastern part of the Democratic Republic of the Congo (DRC). The region has for many years been mired in militia conflicts spilling over from the Rwanda genocide and fueled by competition over lucrative mineral deposits in the area. The conflict in Congo has claimed over five million lives and been marked by brutal sexual violence against women. This is sometimes incorrectly assumed to be rooted in the culture of the region. Sadly, sexual violence is a tactic of terror in conflicts around the world.

In 1999, Chouchou began broadcasting the testimonies of rape survivors and advocating for the rights and protection of women. In 2003, she founded South Kivu's Women's Media Association (AFEM) to train women journalists and defend the rights of women through the media. Her work won her the Knight International Journalism Award in 2009.

SGI Quarterly: What was the reaction when you first started to talk on the radio about the problem of rape in DRC?

Chouchou Namegabe Dubuisson: People were shocked. They said, "How can you talk about sex openly on the radio?" It's a taboo. It wasn't easy.

We started to sensitize people and say, "It's not a problem of sex, it's a big problem of the community." We didn't even have a word to talk about rape, so we had to borrow a word from Kiswahili from Tanzania, and we started talking about ubakaji. It was a new word for eastern Congolese people. So it was the media that sensitized people and told them that there's a problem now that is affecting women and we have to act.

Survivors were rejected--first by their families. This happens even though, when the militias attack the villages, they rape women in front of their husbands and children, in public. It's a planned strategy, a way of terrorizing the community.

SGIQ: Is awareness about rape changing?

CND: Yes. We have done a lot of sensitization of communities and have also worked with many NGOs to empower women. There has been a change. Some survivors have been reintegrated with their families. 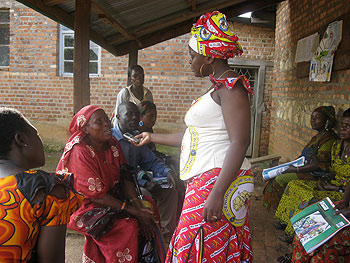 I'll give you an example of a young girl. She was 13 when she was raped, and she had a baby. She had been taken into the forest with her mother, but they managed to escape. I met her after she heard the testimony of another woman and came to us. There are many women who were hiding what had happened to them, and after hearing the testimonies on the radio, they have come to us. They say that telling us their story is the first step to healing their internal wounds.

I rented a house for that girl, because every time people discovered her story, she had to move. I had to tell her, "No, don't leave your place. It's your story, don't hide it." She found a fiancé, but he left her when he found out her story. But when she got a second fiancé, I told her she had to tell him her story. He accepted her, and they married and had a child together.

SGIQ: Do you feel afraid doing your work?

CND: We've been threatened many times. They told me, "We'll take you, and you won't even have a second to call for help." And other members of our organization have been threatened that they will be killed. The threats are anonymous.

SGIQ: Have you ever considered stopping?

CND: Sometimes I think about that but, no, I have to do my job.

But sometimes when I have to talk about the stories and the atrocities that are happening I do feel I want to stop, because I don't see change. But I get courage from the women with whom I work and the survivors. When you see them smile--you can't believe that they would be able to smile after what has happened to some of them. So, I have to continue.

SGIQ: It must take courage even to listen to their stories.

CND: It is difficult. I am pregnant now. Recently in one attack where the militias killed people and raped women, they found a woman who was seven months pregnant, and they cut the baby out of her belly. When I heard that, I was traumatized. And when you listen to the many atrocities that the women face. . . unimaginable things. I used to think that rape was done for sexual needs, but no. It's a strategy to destroy.

SGIQ: Do you manage to feel hopeful amidst all of this?

CND: Sometimes I feel like I've lost hope. But I can't lose hope, because I am working. It's not only me, many people are involved in the fight. One day things will change. And when I do advocacy, I propose solutions.

The first thing is peace and security. And the other problem is the illegal exploitation of mineral resources. It's a cycle.

The international community doesn't like to talk about it although it's a big problem, and they know that they have a responsibility for the presence of the FDLR (Democratic Forces for the Liberation of Rwanda, a rebel group) in the eastern part of Congo, who are committing the atrocities on women. Powerful countries should pressure Rwanda to accept their return. Then I think the eastern part of Congo could live in peace.

We are working to empower women. And we think that solutions will come from women, when they have power. That's my hope. And to talk about the problem is to act. When you make the problem known, it will bring solutions, somehow, though we don't know how.